SCIM Stream is the modern way of user provisioning letting clients subscribe to messages instead of traditional IGA top-down provisioning. SCIM Stream collects information from authoritative sources and publish SCIM-formatted messages to channels according to predefined rules. Endpoints/Applications can then subscribe to relevant stream channels and use their own logic for message handling. 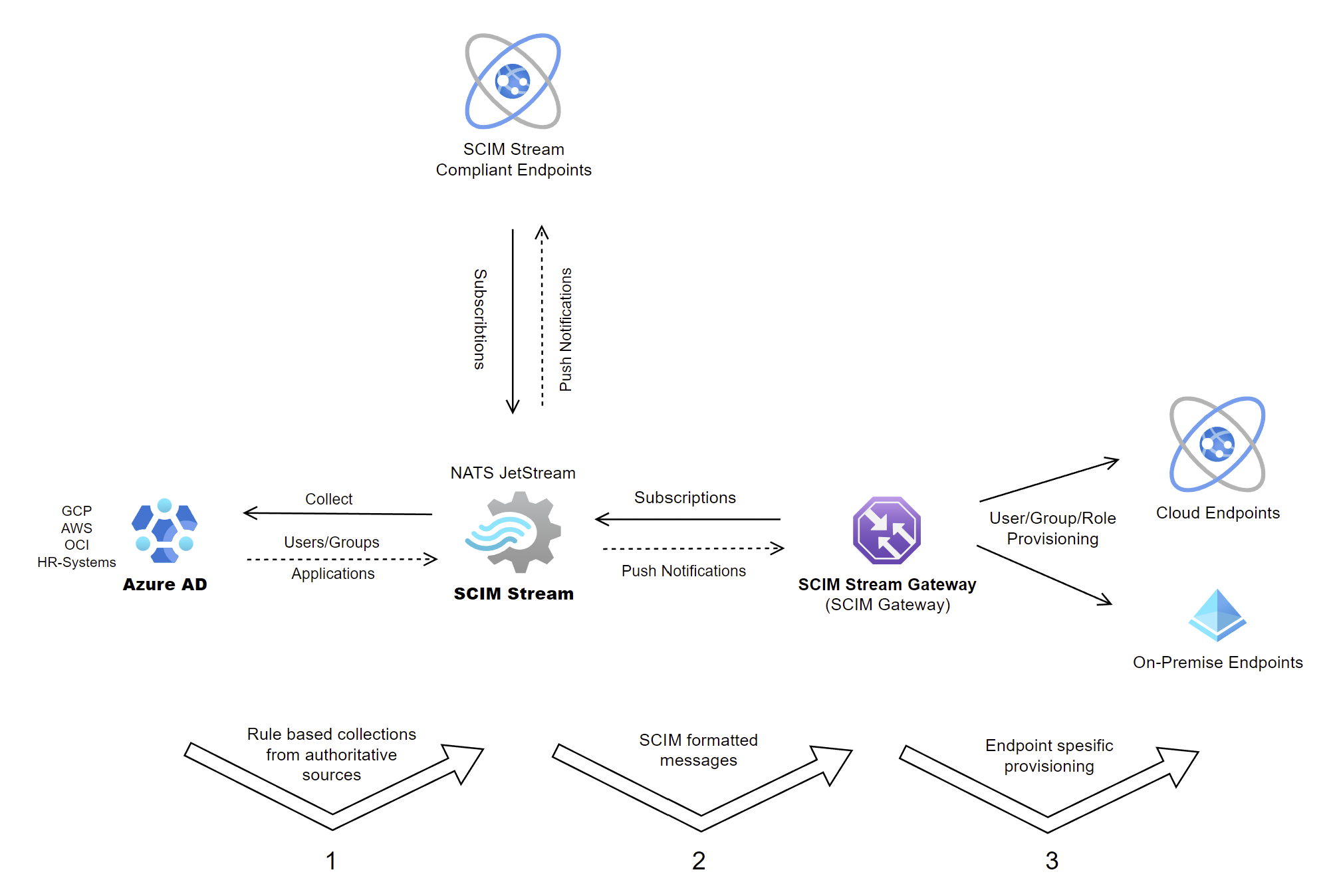 SCIM formatted message below shows an example of a user that have been assigned the Azure AD group “Employee” (can be found in Operations and user.groups)

How can we administer user access like groups on endpoints/applications using SCIM Stream and Azure AD as authoritative collection source?

There are several ways to do this like using AAD groups and/or Application roles.

We could then have one stream rule telling to include Application1

Subscriber or the SCIM Stream Gateway plugin then have logic for handling roles and will do a one-to-one match with endpoint groups using the role value content.

SCIM Stream Gateway have optional logic for converting roles to groups. Plugins existing group-logic can then be used instead of handling roles

SCIM Stream Gateway includes logic for exporting all target endpoint groups/accesses into Application roles that can be imported into Azure. This way we can ensure that Application roles in Azure reflects all corresponding accesses on endpoints and we get out-of-the-box management from Azure.

We could also use AAD Groups, having same group names defined in AAD as we have on the actual endpoint. There is also another way like prefixing AAD group with endpoint/application name e.g., App1_Employee

We could then have a SCIM Stream filtering rule like:
- filter: (user.groups.display -match "App1_.*")

Subscriber or the SCIM Stream Gateway plugin then have logic for removing “App1_” prefix from the group name and will do a one-to-one match towards endpoint having the same group name.

Below is an example of config.yaml configuration setup for collecting information from one AAD tenant every 5 second and streams to 5 different channels: App1, App2, App3, App4 and App5

Rulebased dynamic groups and roles for ABAC/RBAC functionality are supported:

Configuration may also include a mapper section for mapping AAD attributes to SCIM attributes. Any mapper definition included will be merged with default mapper configuration that have following settings:

Configuration may also be set using environments or external file.

Syntax is variable names like above dotted notation, but starting with SCIM-STREAM_, all uppercase, and underscore instead of dots. Attributes having underscore e.g. user_private_key must be used without underscore like USERPRIVATEKEY. Arrays like Azure using AZURE[index]

Secrets like azure.auth.client_secret and streamserver.publisher.user_private_key defined in configuration file will automatically become encrypted on startup, and this file cannot be copied from one machine to another. Seed logic used for encryption may be overridden by your own seed defined as environment SEED e.g.:

Having subscriber enabled and messages are received will result in automated provisioning through any existing plugin - everything out-of-the-box.

SCIM Stream Gateway requires the following subscriber section to be added in the plugin configuration:

Azure Application Roles can be generated by using GET /AppRoles

After having updated the Azure Manifest with appRoles, all we have to do is configuring SCIM Stream to include the Azure Application ID to a stream channel rule:

And configure SCIM Stream Gateway plugin to use that stream channel:

Note, by setting "convertRolesToGroups": true we can use plugins existing group-logic instead of using roles